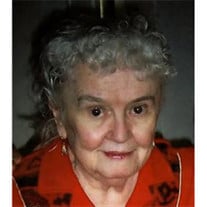 Effie Marion Eastep, 87, of Springdale, Arkansas, died August 16, 2015 at Pilgrim's Rest, Arkansas. She was born February 13, 1928 at Bethel, Missouri, the daughter of Leonard and Beulah Leobo Davis. She was a homemaker and attended the Evergreen Church of Christ. She enjoyed going to senior dances, sewing and her family. Effie was a loving Mother, Grandmother, Great-grandmother and Great-great-grandmother. She was preceded in death by her first husband, George Croxton who preceded her in death on December 7, 1991. She was also preceded in death by her parents and stepmother, Nell Davis. She died alongside her husband, Charlie Thomas Eastep whom she married on March 13, 1992. Survivors include: one son and daughter-in-law, Ric and Deborah Croxton of Conway, Arkansas; two daughters and one son-in-law, Margie and Scott Chiarizzio of Maumelle, Arkansas and Shelley Robertson of Springdale, Arkansas; one stepdaughter and stepson-in-law, Barbara and Lavon Samuels of Hindsville, Arkansas; three grandsons and two granddaughters-in-law, Jerry and Brittannee McGarrah of Prairie Grove, Arkansas, Joey and Jessie McGarrah of Paris, Arkansas and Daniel Robertson of Springdale, Arkansas; one granddaughter and grandson-in-law, Mandy and Charles Savage of Springdale, Arkansas; seven stepgrandchildren; six great-grandchildren, Hannah, Hayley, Haven and Halyn of Springdale, Arkansas, Cole McGarrah of Prairie Grove and Addie McGarrah of Paris, Arkansas; four stepgreat-grandchildren and four great-great-grandchildren. Funeral services will be held at 10:00 A. M. Wednesday, August 19, in the chapel of Brashears Funeral Home with Charles Bell, Minister officiating. Interment will be in the Bohannan Cemetery under the direction of Brashears Funeral Home www.brashearsfuneralhome.net of Huntsville, Arkansas. Pallbearers will be: Danny Robertson, Jerry McGarrah, Scott Chiarizzio, Charles Savage, William Rountree and Rick Southerland. The family will receive friends from 6:00 P. M. to 8:00 P. M. on Tuesday at the funeral home.

Effie Marion Eastep, 87, of Springdale, Arkansas, died August 16, 2015 at Pilgrim's Rest, Arkansas. She was born February 13, 1928 at Bethel, Missouri, the daughter of Leonard and Beulah Leobo Davis. She was a homemaker and attended the Evergreen... View Obituary & Service Information

The family of Effie Marion Eastep created this Life Tributes page to make it easy to share your memories.

Send flowers to the Eastep family.