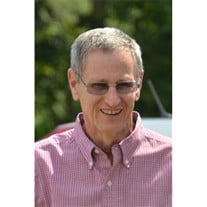 Dwight Alvin McLoud, 63, of Huntsville, Arkansas, died August 21, 2016 at his home. He was born December 30, 1952 at Huntsville, Arkansas, the son of Leepha Rufus and Minnie Roberta Litterell McLoud. He was an employee of the Physical Plant Department of the University of Arkansas and a member of the Draketown Church of Christ. He was preceded in death by two sisters, Vernadene Smith and Eilene Walden. Survivors include: his wife, Valerie Jean Boyd McLoud of the home; three daughters and one son-in-law, Christi Angela McLoud of Mayflower, Arkansas, Misty Leigh and Nathan Hartwick of Bryant, Arkansas and Payton Danielle McLoud of the home; three brothers, Derral McLoud of Dumas, Texas, Delbert McLoud of Logan, New Mexico and Dwain McLoud of Forum, Arkansas; two sisters, Lois Jones of Forum, Arkansas and Cheryl Roberts of Springdale, Arkansas and four grandchildren, Blade Dykes and Baylen Dykes, both of Mayflower, Arkansas and Sienna Hartwick and Hadley Hartwick, both of Bryant, Arkansas. The family will receive friends from 5:00 to 8:00 P. M. on Thursday, August 25, at Brashears Funeral Home in Huntsville, Arkansas. Arrangements are under the direction of Brashears Funeral Home www.brashearsfuneralhome.net of Huntsville, Arkansas. Memorials may be made to the Northwest Arkansas A. L. S. Foundation, 1200 West Walnut Street, Rogers, Arkansas 72756.

The family of Dwight Alvin McLoud created this Life Tributes page to make it easy to share your memories.

Send flowers to the McLoud family.