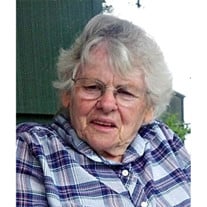 Dorthenia Littrell, 85, of Huntsville; died Thursday, November 7, 2019, at Huntsville. She was born Sunday, November 4, 1934, in Eureka Springs; to Arlo and Jewell Ash Benedict. Dorthenia married Troy Littrell in Madison County on May 17, 1953; and together they were parents to three children. She was a farmer. Dorthenia was predeceased by her husband, Troy Littrell; her parents, three brothers, two sisters; one grandson, Devon Terrell; and one granddaughter, Belinda Littrell. She is survived by two sons and one daughter-in-law, Gary Littrell of Forum, and Kerry and Glenda Littrell of Kingston; one daughter and son-in-law, Peggy and Jay Terrell of Huntsville; one sister, Arlene Martin of Huntsville; 6 grandchildren, and 8 great-grandchildren. Graveside services will be 2:00 PM, Friday, November 15, 2019, at Alabam Cemetery with Justin Harris officiating. Pallbearers will be Jerrad Littrell, Brian Littrell, Johnny Littrell and Charlie Harrison. Services are entrusted to Brashears Funeral Home and Crematory of Huntsville.

The family of Dorthenia Littrell created this Life Tributes page to make it easy to share your memories.

Send flowers to the Littrell family.