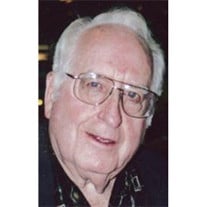 Rev. Don V. Bumgarner of Huntsville, Arkansas, passed away on March 15, 2013 at the age of 94 at Washington Regional Medical Center in Fayetteville, Arkansas. Don was preceded in death by his wife, Mildred R. (Unruh) Bumgarner, who died on June 14, 2008, one brother, Virgil H. Bumgarner, and one sister, Bethel M. Acuff. Donald Van Bumgarner was born in Corwin, Kansas on February 24, 1919 to Frank and D. Mary Pasley Bumgarner. He graduated from Attica High School (Attica, Kansas) in 1937. He received a BA in Sociology with a minor in Music from Bethel College in North Newton, Kansas in 1942. During his college stay, from 1938-1942, he was a member of the men's college quartet that toured the country. He attended United Theological (Bonebrake) Seminary in Dayton, Ohio from 1944-1947 earning a Masters of Divinity in 1947. He married Mildred Ruth Unruh on June 1, 1943 in Newton, Kansas and enjoyed 65 years of marriage with the woman he loved prior to Mildred's death in 2008. He served the God he loved 30 years in the ministry including: 2 years (1940-1942) at Evangelical United Brethren (EUB) Church in Burns, Kansas while he was in college. 2 years (1942-1944) at First Baptist Church in Sharon, Kansas while he cared for his family farm due to illness of his parents and while his brother, Virgil, served in WW II. 3 years (1944-1947) at EUB Church in Castine, Ohio during Seminary. 5 years (1947-1952) at EUB Church in Richland, Kansas. 11 years (1952-1963) at EUB Church in Parsons, Kansas. At this time in his ministry he was a member of the conference men's quartet called the Singing Parsons that toured Kansas. 11 years (1963-1974) at Salem United Methodist Church in Newton, Kansas. In 1974, he retired for 40 years to the farm he loved, his "heaven on earth", south of Huntsville, Arkansas. During his retirement he farmed and cared for his mother, brother and sister. He was an active member of the Huntsville United Methodist Church in his retirement. He is survived by 5 children: Kenneth Baumgarner of Sydney, Australia; Keith Bumgarner, Betty (and husband Carlton) Butler and Don W. Bumgarner, all of Huntsville, Arkansas; and Bruce (and wife Jackie) Bumgarner of Plano, Texas. He is survived by 10 grandchildren: Philip (and wife Marjo) Scherrer, Elizabeth Scherrer, Carolyne Dal Bianco, Kevin (and wife Melissa) Montgomery, Krystal (and husband Sean) Pierce, Jessica (and husband Chris) Lashley, Brian ( and wife Robin) Butler, Courtney (and husband Brett) Webster, Amanda Bumgarner, and Aaron Bumgarner. He is survived by 10 great grandchildren: Joshua Scherrer, Joseph Scherrer, Phoebe Scherrer, Zane Dal Bianco, Allen Pierce, Bennett Tiner, Blake Butler, Bresyn Webster, Cameron Montgomery, and Caleb Montgomery. A Visitation will be on Wednesday, March 20, 2013 from 5:00 P. M. to 7:00 P. M. at Brashears Funeral Home, Huntsville, Arkansas. Those that wish can also send messages may do so at brashearsfuneralhome.net. A family graveside burial service will be held on March 21, 2013 at the Aurora Cemetery, Aurora, Arkansas, Pastor Allen Crum officiating. Memorial gifts in lieu of flowers can be sent to Huntsville United Methodist Church memorial fund, Post Office Box 1377, Huntsville, Arkansas 72740-1377. A memorial celebration for the lives of Don and Mildred Bumgarner will be held on Sunday, April 28, 2013 from 2-5 pm at the Carroll Electric Community Room in Huntsville, Arkansas.

Rev. Don V. Bumgarner of Huntsville, Arkansas, passed away on March 15, 2013 at the age of 94 at Washington Regional Medical Center in Fayetteville, Arkansas. Don was preceded in death by his wife, Mildred R. (Unruh) Bumgarner, who died on June... View Obituary & Service Information

The family of Don V. Bumgarner created this Life Tributes page to make it easy to share your memories.

Rev. Don V. Bumgarner of Huntsville, Arkansas, passed away on...

Send flowers to the Bumgarner family.