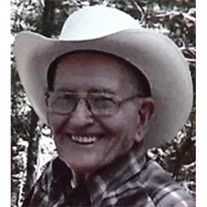 David Ernest Griffith, 90, of Huntsville, Arkansas, died July 16, 2014 at Circle of Life Hospice in Springdale, Arkansas. He was born November 10, 1923 at Reform, Mississippi, the son of John William and Minerva Dudley Griffith. He had retired... View Obituary & Service Information

The family of David Ernest Griffith created this Life Tributes page to make it easy to share your memories.

Send flowers to the Griffith family.