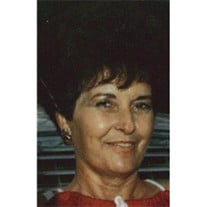 Daisy Mae Reed, 72, of Huntsville, Arkansas, died November 16, 2012 at her home. She was born April 7, 1940 at Kingston, Arkansas, the daughter of Floyd Columbus and Mollie Gertrude Norris Bowen. She was a retired garment inspector and a Baptist. Survivors... View Obituary & Service Information

The family of Daisy Mae Reed created this Life Tributes page to make it easy to share your memories.

Send flowers to the Reed family.