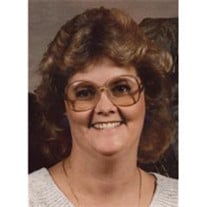 Cheryl Ann Bowerman, 54, of Hindsville, Arkansas, died February 7, 2013 at the Northwest Medical Center-Springdale. She was born May 5, 1958 at Wichita, Kansas, the daughter of James Carl and Chassie Lee Maddock Archer. She was employed by Tyson's... View Obituary & Service Information

The family of Cheryl Ann Bowerman created this Life Tributes page to make it easy to share your memories.

Send flowers to the Bowerman family.