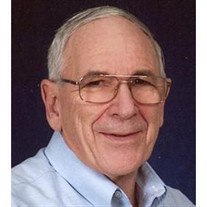 Cary B. Williams, 74, of Huntsville, Arkansas, died September 21, 2016 at Countryside Assisted Living in Huntsville, Arkansas. He was born May 28, 1942 at Hutchinson, Kansas, the son of Vernon Elwood and Vivian Alta May Jones Williams. He was... View Obituary & Service Information

The family of Cary B. Williams created this Life Tributes page to make it easy to share your memories.

Send flowers to the Williams family.