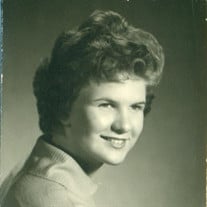 Bobbie Lea (Williams) Rogers, 78 of Japton slipped away from this life at Northwest Medical Center January 31, 2022 with her youngest daughter, Kelli by her side. Bobbie (the oldest) was born July 22, 1943 at Pateros, Washington to Robert Lee and Bette Marie (Garinger) Williams. Bobbie attended Pateros High School where she proved her wisdom and ability to excel. She met a handsome young adventurous man from Arkansas who traveled to Pateros to pick apples for several seasons. She fell hook line and sinker for Lynn and they married July 29,1961 at the Church of Christ in Pateros, Washington. Bobbie loved her family dearly and cried all the way down the coast and then to Arkansas where they were married for 57 years and raised four children. Ms. Bobbie loved children and dedicated her life to serving families. She worked for Madison County Head Start Home Base program for 28 years with 26 of those years serving as the Director. She was a great leader and was a member of Kiwanis. She was a Christian and a member of the Mt. Grove Church of Christ where she taught Sunday classes and VBS classes for many years! Ms. Bobbie Lea was a giver, giving even when that meant sacrificing the things she needed. She loved everyone she met and was loved by all. She was host to many strangers serving them by providing them her home and warm meals along with doing their laundry. She had great ability to pick out perfect thoughtful gifts and cards and later was known for gifting rugs made by Thelma Parker (92 years old). Bobbie was a great cook and was known for her Mexican Chicken, sauerkraut & sausage, cheese ball, and her fabulous Taco Salad! Bobbie not only loved her community, she loved her family and friends most of all. She loved spending time with her grandchildren and great grandchildren along with all her nephews and nieces. She spent countless hours in prayer for those she loved and used her wisdom to lead her loved ones to Jesus. She lived Matthew 25:40, Hebrews 13:2 and is Proverbs 31:10-31! Bobbie was preceded in death by her love, Lynn Rogers of her home; parents Robert Lee and Bette Marie of Pateros, Washington; in-laws Bruce Freeman and Oneida Fern Rogers of Japton, Arkansas; one sister and brother in-law Lynda and Randy Williams, of Bridgeport Bar (Brewster), Washington; Brother in-law Lee Walden of Forum, Arkansas; her brother and sister in-law Wilson and Darlene Clark of Farmington, Arkansas; one niece Debbie Walden of Forum, Arkansas; and her great niece Kayla Dotson of Japton, Arkansas. She is survived by her four children and their spouses along with nine grandchildren and ten great grandchildren with three on the way: Loy Bruce Rogers of the home; Vicki Sue and Danny Martin of Japton (Payton Cole and Jordan Thomas Children: Beckham, Harrison), (Samuel Colt and Megan Thomas Children: Kaleb and Hagen), (Kamri Rashel and Matt Cleaver Children: Mosston, Parker, and baby on the way), and (Faith Keyli Thomas); Andy Dean and Shelly Rogers of Japton (Candace Nicole and Dustin Serio Children: Everett and Aeowyn /A-Owyn/), (Joseph Andrew Rogers Daughter: Heidi), and (Ryan Rogers); Kelli Kay and Allen Terry of Springdale (Kaylena Danell and Cody Nims Child: Tanik and baby on the way), and (Shaylea Brooke Terry). Bobbie has two surviving sisters and one brother-in-law; Theda and Keith Holbrook of Wenatchee, Washington and Carol Shenyer of Spokane, Washington and two brothers Robert Williams of Goldendale, Washington and Timothy Williams of Pateros, Washington. Countless nephews and nieces. She loved them all dearly! It is appropriate to add that she is also survived by countless friends and extended family. To know her is to love her. Services: The family will receive friends at 1:00 PM, Monday, February 7, 2022, Brashears Funeral Home. Funeral Services will begin at 2:00 PM, with Brandon Rogers and Jeff Thomas officiating. Pallbearers: Andy Rogers, Payton Thomas, Samuel Thomas, Joseph Rogers, Ryan Rogers, Allen Terry, Danny Martin, Cody Nims, Matt Cleaver and Dustin Serio. Honorary pallbearers: Loy Rogers, Tim Williams, Randy Garrett, Jim Dickerson, Bill Rogers, and Dennis Rogers. Interment will immediately follow services at Drakes Creek Cemetery. In Lieu of flowers donations can be sent to Truth for Today 2209 Benton, Searcy, AR 72143 or Gospel Tracts International 2125 North Center Street, Fayetteville, AR 72701 Services are entrusted to Brashears Funeral Home and Crematory of Huntsville.

Bobbie Lea (Williams) Rogers, 78 of Japton slipped away from this life at Northwest Medical Center January 31, 2022 with her youngest daughter, Kelli by her side. Bobbie (the oldest) was born July 22, 1943 at Pateros, Washington to Robert Lee... View Obituary & Service Information

The family of Bobbie Rogers created this Life Tributes page to make it easy to share your memories.

Bobbie Lea (Williams) Rogers, 78 of Japton slipped away from...

Send flowers to the Rogers family.