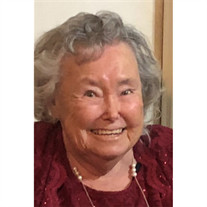 Anna Carolyn Ross Woodbridge, 89, of Huntsville; went home to be with her Lord Jesus on Saturday, December 28, 2019.  She is dancing with the angels. Anna was born September 5, 1930, at Treat, Arkansas; the daughter of Andrew Jackson and Ollie Terry Ross. Anna graduated from Pottsville High School in 1948.  She met and married Mark Otis Woodbridge in 1955, then moved to their home on the farm at Alabam and has resided there ever since. Anna loved the Lord Jesus. Her faith was strong and going to church was a priority.  She was a member of the Forum Assembly of God.  She worked at various jobs including owning the first laundry mat in Huntsville that was equipped with wringer washers.  She was also the last acting postmaster at Forum.  Anna and her husband also ran the Forum Store for many years.  Anna was the first woman inducted into the Huntsville Kiwanis's Club and received Kiwanis of the Year in 2001.   She was also a member of the American Legion Ladies Auxiliary Hayes-Smith Post 137 and received an appreciation award for her exuberant generosity to the post. Anna was very outgoing and loved her career in real estate where she worked for 45 years.  Meeting and helping people were her passion.  She was very unhappy that she was forced to retire at age 87, after having a shoulder replacement from a fall.  Anna's hobbies included taking pictures, eating out, and entertaining family and friends.  She will be greatly missed by all her family and friends. The family would like to express their deep appreciation to Highlands Oncology Group and special thanks for the loving care that Elizabeth, Michelle, and Ruth provided at the WRMC Infusion Center for 3 years.  They turned a trying weekly ordeal into something that mother enjoyed and appreciated; making her feel so special; and that means so much to her daughters. Anna was preceded in death by her husband, Mark Otis Woodbridge; her parents, her brother, Jackson Ross, Jr.; and her sister and brother-in-law, Mildred and Bill Davidson. She is survived by three daughters and son in laws, Marquita Kendrick, Sally and Rick Witt, and Susan and David Courtney; and one honorary daughter, Gayla Behlke, her loving caregiver.  She is also survived by seven grandchildren, Ericka Witham and husband, Brandon; Chase Kendrick and wife, Renee; Kara Sanchez and husband, David; Will Courtney and wife, Kathi; Bryan Courtney, Joe Courtney, and Gene Courtney; and seven great grandchildren, Chloe and Asher Witham, Blaine Kendrick, Jessica Livermore; Lorelai, Mikey, and Conner Sanchez; and one great-great grandchild, Ryder Lopshire.  Other survivors include her sister and brother-in-law, Shirley and Dois Taylor; and sisters-in-law, Mary Jo Hankla and Roberta Box and husband, Ivan. The family will receive friends 5:00-7:00 PM, Friday, January 3, 2020; at Brashears Funeral Home.  Funeral services will be 10:00 am, Saturday, January 4, at Brashears Funeral Home with Jack Graham and Larry Joe Johnson officiating.  Pallbearers will be Chase Kendrick, David Courtney, Will Courtney, Bryan Courtney, Joe Courtney, and Gene Courtney. Honorary pallbearers will be Rick Witt, Tom Lee, Dois Taylor, Ivan Box, Tom Wiles, and Larry Joe Johnson.  Interment will immediately follow services at Alabam Cemetery.  Memorials may be made in Anna's name to the Forum First Assembly of God, c/o Jack Graham, 451 Madison 8001, Hindsville, Arkansas 72738; or the Alabam Cemetery, c/o Brent Owens, PO Box 66, Huntsville AR, 72740.

Anna Carolyn Ross Woodbridge, 89, of Huntsville; went home to be with her Lord Jesus on Saturday, December 28, 2019.  She is dancing with the angels. Anna was born September 5, 1930, at Treat, Arkansas; the daughter of Andrew Jackson and Ollie... View Obituary & Service Information

The family of Anna Woodbridge created this Life Tributes page to make it easy to share your memories.

Send flowers to the Woodbridge family.