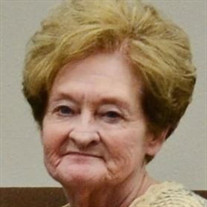 Anna Sue Broyles, 75, of Huntsville passed away on Thursday, February 3 at Washington Regional Medical Center in Fayetteville, Arkansas. She was born on April 15, 1946 in Huntsville, Arkansas to Ellhannan Searles and Only Cain Reed. Susie married Leon Wade Broyles on July 5, 1972. She was a cook at the Kozy Korner Café in Huntsville for many years and then she went on to be a co-owner of the War Eagle Minnow Farm for 32 years, where she dearly loved serving and visiting her customers. If you were a customer, you no doubt heard all about her grandkids and great-grand kids. Susie also loved her flowers, cattle and her soap operas (nothing made her more upset then for some special announcement or speech to replace her soaps). Susie was preceded in death by her parents; two brothers, James and Johnny Reed; one sister, Dixie Jones; one step-daughter, Delyn Marsh; and four nephews, Chester Jones, Jerry Jones, Charles Jones, and David Jones. She is survived by her husband of almost 50 years, Leon Broyles of the home; one son and daughter-in-law, Jeff and Deanne Stacy of Huntsville; one daughter, Kathy Cotton of Huntsville; one step-son, Wade Broyles of Huntsville; one step-daughter and son-in-law, Deann and Tom Benefield of Huntsville; two grandsons and families, Bailey and Justice Cotton of Huntsville and Brady and Leanna Cotton of Huntsville; four great grandchildren with one more on the way (the apples of her eye), Bentley Cotton, Bennett Cotton, Brylee Cotton and Benji Cotton; one sister-in-law, Sharon Reed of Huntsville; sister-at-heart, Carol Chavez of Huntsville, and many nieces and nephews. Visitation services will be held Wednesday, February 9th from 5:00pm – 7:00pm at Brashears Funeral Home. Funeral services will be held at 10:00am on Thursday, February 10th at Brashears Funeral Home with Larry Mitchell officiating. Pallbearers will be Bailey Cotton, Brady Cotton, Danny Reed, Daniel Sams, Randy Clark, Sam Fowler. Interment will immediately follow services at Sparks Cemetery in Huntsville. Services are entrusted to Brashears Funeral Home and Crematory of Huntsville.

Anna Sue Broyles, 75, of Huntsville passed away on Thursday, February 3 at Washington Regional Medical Center in Fayetteville, Arkansas. She was born on April 15, 1946 in Huntsville, Arkansas to Ellhannan Searles and Only Cain Reed. Susie... View Obituary & Service Information

The family of Anna Sue Broyles created this Life Tributes page to make it easy to share your memories.

Anna Sue Broyles, 75, of Huntsville passed away on Thursday,...

Send flowers to the Broyles family.