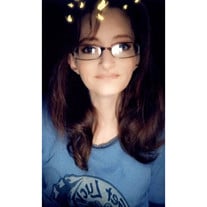 Amanda Denise Lemley, 42, of Huntsville; died Sunday, April 26, 2020, at Fayetteville. She was born Friday, January 20, 1978, at Dermott; to Gaylon Lemley and Brenda Burris Robinson. Amanda was predeceased by her grandparents, Billy Burris, and Herbert and Dorothy Lemley; also a nephew, Noah Ray Podoll. She is survived by her two daughters, Taigen Moore of Huntsville, and Maegan Lemley of Huntsville; her parents, Gaylon Lemley of Dermott, and Brenda and Bill Robinson of Huntsville; her grandmother, Barbara Burris of Huntsville; one sister, Tabitha Williams of Huntsville; one brother and sister-in-law, Richard and Gloria Fouts, Jr., of Huntsville; one step-sister and brother-in-law, Crystal and Jeremy Littrell of Bentonville; one step-brother William Oliver of Killeen, Texas; and numerous aunts, uncles, nieces and nephews. Private family graveside services were held at Alabam Cemetery with Michael Nichols officiating. Pallbearers were be Richard Fouts, Jr., Jeremy Littrell, Robbie St.Clair, Michael Fulfer, Douglas Brown, and Bill Robinson.  The family would like to thank each and everyone for all the prayers, food, cards, gifts, during our loss of Amanda.  Our heartfelt thanks to everyone.  She will be missed dearly.  Services are entrusted to Brashears Funeral Home and Crematory of Huntsville.

The family of Amanda Lemley created this Life Tributes page to make it easy to share your memories.

Send flowers to the Lemley family.