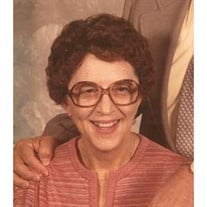 Alice Hicks Hart, 94, passed away July 7, 2018, at Harrison. She was born November 29, 1923, at Mauldin, to Itha and Bertha Phillips Hicks. Alice married Winfred "Pete" Hart in Hot Springs on July 27, 1946. She was an honors graduate of St. Joseph School of Nursing; and practiced as a registered nurse from 1946 until her retirement in the late 1970's. Alice is predeceased by her husband, Pete; and siblings, Faye Hudnell, Helen Hayes, and Glen Hicks. She is survived by two sons and one daughter-in-law, Richard Hart of Ashland, Missouri; and Randy and Jeanette Hart of Gainesville, Georgia; two grandchildren, John Hart of China, and Sarah Hart of Omaha, Nebraska; and one sister, Shirley Berfanger of New Castle, Indiana.Funeral Services will take place in the Bruce Brashears Memorial Chapel at 11:00 a.m., on Monday, July 23, 2018, with Reverend Brad Moore officiating.  The family will receive friends prior to the service.  Interment will be held at 1:00 p.m., at the Fayetteville National Cemetery. Honorary pallbearers will be David Cline, Diedra Mitchell, Kevin Hatfield, and Tom Tice. In lieu of flowers, memorials in Alice's name may be made to the American Cancer Society, P.O. Box 22478, Oklahoma City, OK 73123. Services are entrusted to Brashears Funeral Home and Crematory of Huntsville.

The family of Alice Hart created this Life Tributes page to make it easy to share your memories.

Send flowers to the Hart family.